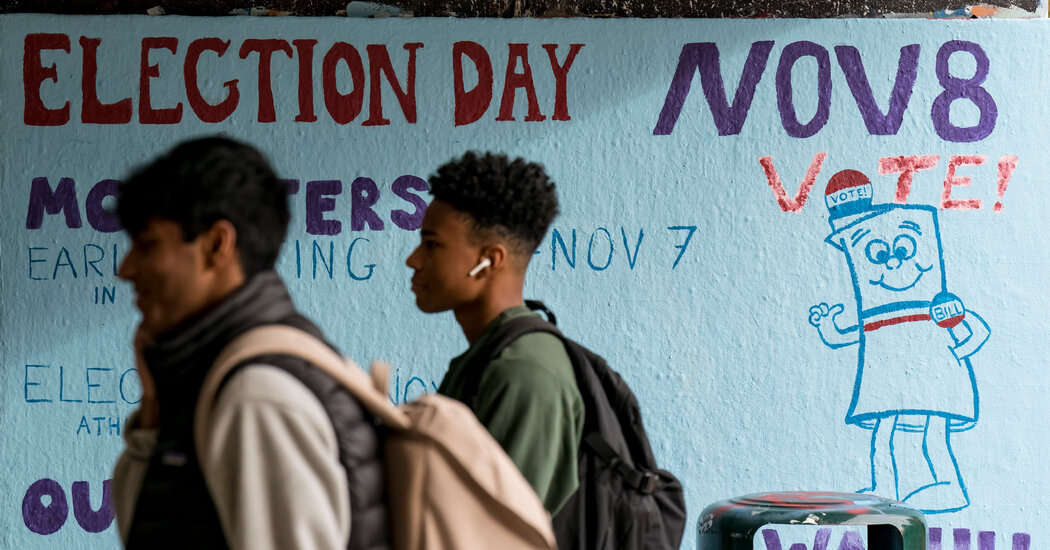 The youth vote turned out, especially in some key swing states Democrats won. But some experts say reports of a surge in young voters were overstated.

MILWAUKEE — Nichole Williams, 20, voted on Tuesday with her sister Grace, who is 22, fitting in a trip to the polls around Nichole’s classes nearby at the University of Wisconsin-Milwaukee and their part-time jobs coaching dance at a local middle school.

​Both registered to vote upon turning 18 in their hometown of Janesville, Wis., and haven’t missed an election since. What felt different this time, they said as they took in the bustle at the polling place at Riverside University High School, packed largely with young people, was the intensity of their friends. They could not think of anyone they knew who did not go to the polls.

Both voted Democratic, drawn to the party’s defense of abortion rights and other issues that appeal to young voters.

Preliminary figures indicate that Democrats, particularly in swing states like Wisconsin and Michigan, benefited from a strong turnout of young voters, aged 18-29, the age group that regularly shows the strongest support for the party — and regularly votes the least.

But less certain and much debated after Tuesday’s vote was whether the turnout was particularly strong this year, or more a continuation of support seen in the last midterm election in 2018 — which restored the party’s control of the House of Representatives — or the 2020 vote that elected President Biden and gave the party control of both chambers of Congress.

Tufts University’s Tisch College of Civic Life, perhaps the most assiduous tracker of young voters, estimated on Thursday that 27 percent of 18-to-29 voters cast ballots in midterm elections — and that 63 percent of them voted for Democrats in House of Representatives elections.

That estimate was based on a nationwide exit poll of voters jointly conducted by the three major television networks and CNN; those preliminary numbers will be updated with data from actual voting. The turnout rate for all voters was 47 percent, according to a preliminary estimate by the U.S. Elections Project at the University of Florida.

In off-year elections, the preliminary 27 percent youth turnout is second only to 2018, when 31 percent of young people voted and 67 percent favored Democrats, according to the college’s Center for Information and Research on Civic Learning and Engagement, or Circle.

“What’s clear from the data is that young Democrats turned out,” said Victor Shi, the director of strategy for Voters of Tomorrow, a Generation Z-centered civics advocacy group. An analysis of early voting data, he said, indicated that young people had cast a million more Democratic votes than Republican ones. And he said that early voting by young Democratic supporters exceeded 2018 totals in three battleground states — Georgia, Michigan and Ohio.

That said, the extent to which the 18-to-29 vote affected the results is unclear and will not be known for weeks, until analysts can sift through complete election results.

And no single demographic group determined the results. Early voting data also showed that Asian American voters, while a smaller group, voted in higher numbers and were more reliably Democratic than in the last midterm. Among young voters, early turnout of Democratic Asian American voters rose 36 percent, compared with a 14 percent rise in Republican support, Tom Bonier, the chief executive of the Democratic data analysis firm TargetSmart, noted the weekend before the election.

Voto Latino, a pro-Democrat advocacy group, argued that Latino turnout exceeded that of the 2018 midterms. In key races such as those for Senate seats in Pennsylvania, Nevada and New Hampshire, the group said, the Latino turnout skewed Democratic as much as or more than the youth vote. (Another advocacy group, Mi Familia Vota, noted that three in 10 Latino voters are under age 30, so there is substantial overlap between the youth vote and the Latino vote.)

And women voters, driven by the issue of abortion rights, played a major role in the outcome of the midterms, though the breakdown of their support for each party in comparison with past years is not yet clear.

Some anecdotal evidence of young people’s enthusiasm for voting was apparent. At the University of Michigan in Ann Arbor, students waited in line for as much as four hours to cast ballots. At the Riverside high school polling place in Milwaukee, which is close to the University of Wisconsin-Milwaukee and other college campuses, the polls’ chief inspector, Bill Christianson, estimated that more than half of the traffic there was from people registering to cast their first ballots — and many were young.

“We were a lot busier than we expected to be today,” he said. “A lot more students and people in their early 20s turned out this election than have for some of the previous elections.”

Across the state on the banks of the Mississippi River, Anthony Chergosky is a political science professor who advises campus political groups at University of Wisconsin-La Crosse. He said he had noted a significant uptick in student interest in the midterm as opposed to past elections.

“Time and time again, I heard Roe versus Wade being overturned as a major shock to the system for young voters,” he said. “A lot of students for the first time were really figuring out the Supreme Court’s role in the American political system, and they were reflecting on how the ruling did or did not reflect their values.

“It seemed to inspire a lot of questions, a lot of curiosity and a lot of mobilization that might not have otherwise taken place.”

Political analysts said that young people were attracted to the Democratic side by its position on issues they consider crucial: abortion, climate change and gun rights among them. President Biden’s deftly timed decision this fall to forgive a share of student loan debt — since halted by court rulings — also could not have hurt.

But Kei Kawashima-Ginsberg, the director of the Circle project, said the youngest members of the 18-to-29 group had been driven to embrace politics in a way their elders had not, so much so that the turnout gap between voters under 25 and those under 30 was rapidly closing.

“Parkland got a lot of young people into politics even before they were 18,” she said, referring to the murder of 17 people in a shooting at Marjory Stoneman Douglas High School in Parkland, Fla., in 2018. “It’s a very different kind of milieu for them. Politics is everywhere.”

The statistics, however, are more equivocal. Students make up about 8 percent of the 120,000 residents of LaCrosse County, but turnout there actually dropped some five percentage points, and some 2,000 votes, between 2018 and 2022.

Moreover, the Circle analysis noted that while young voter turnout this election was robust, the preliminary figures indicate it actually made up a smaller share of the electorate than in 2018 — 12 percent, down from 13.

David Shor, who founded the Democratic data analysis firm Blue Rose Research, said the turnout numbers from early voting do not support the notion that turnout by young voters was especially crucial to Democrats’ success.

“The early vote data tells a pretty consistent story: Republican turnout ended up being higher than Democratic turnout,” he said. “There couldn’t have been a surge in youth turnout if the electorate was more Republican than Democratic.”

Democrats outperformed expectations, he said, because they managed to persuade Republican and independent voters to support their candidates, particularly in swing states with crucial races.

Mr. Bonier, from the Democratic data firm TargetSmart, was among the first to take note of an upward curve in early voting by young people. In an interview, he said he disagreed with Mr. Shor’s analysis, but that it was far too early to make sweeping statements about what happened.

“We did see, in the last week of early voting, that the youth vote really began to surge,” he said, “which would suggest that the notion that the youth vote would come out on Election Day was valid.” But only an analysis of all the votes will determine whether that was true.

There is another theory, though, hinted at in some of the numbers. It argues that voting by young people was down overall from 2018 — but higher in the states where it counted.

Analysts at Circle, for example, concluded that while 27 percent of young voters turned out nationwide, that number rose to 31 percent in nine key states. Republicans did well in three — Florida, North Carolina and Ohio — but the remaining six were all states where Democrats scored notable victories, such as Michigan New Hampshire, Pennsylvania and Wisconsin.

Mr. Shi, of Voters of Tomorrow, made the same point. “If you look at the battleground states, what we see is young Democrats surging and young Republicans staying home.” He said he believed that the extremist positions of Republican candidates in those states riled up young Democrats but had the opposite effect on Republicans.

In Wisconsin, the director of the state Democratic Party, Ben Wikler, offered his own statistic: Just before the 2018 midterms, the state claimed 654,000 registered voters under age 35. This year, he said, the comparable figure was 783,000 — a 20 percent increase.

He said that rules allowing new voters to register on the same day they cast ballots drove some of the rise, as did an intensive effort to recruit young voters that the state Democratic Party launched in 2019.

“I stood on the University of Wisconsin-Madison campus on the last day of early voting as 18-year-olds waited for an hour and a half to cast the first ballot of their lives,” he said. “And as far as I could tell, they were all voting Democratic.” Seventy percent of the state’s young early voters favored the re-election bid of Gov. Tony Evers, a Democrat, he said, a far greater share than any other age group.

“That’s a unicorn in a midterm with a Democratic president,” he said.

Akshay Kumar: Coping with everything in the industry is difficult