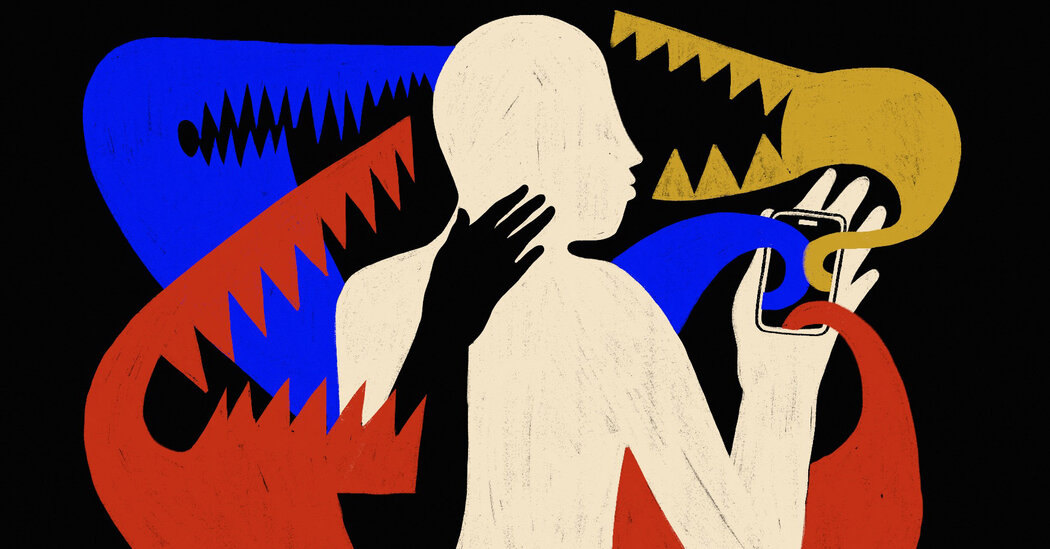 Late last fall I suffered a second-trimester pregnancy loss. The experience was devastating, and the weeks after were a blur of grief, anger and physical turmoil. About a month later, on a day when I was feeling more like myself than I had in a while, I was folding clothes in my 3-year-old son’s room when I received an alert from MyChart, an app that gives patients access to their records and doctors’ messages, with a new test result to view.

But I was not prepared for what I saw on the screen — a fetal autopsy report.

Later, my OB-GYN explained that I had received the alert without hearing from her first because of a provision in the 21st Century Cures Act, a federal law that requires all medical testing centers to release results to patients “without delay.” In practice, this means that doctors and patients often receive results simultaneously — and some patients are seeing them before their doctors have a chance to look.

President Barack Obama signed the Cures Act, which also provided billions of dollars for medical research, in December 2016. But the provision governing access to patient records didn’t take effect until April 2021, when the U.S. Department of Health and Human Services began enforcing a rule declaring that “blocking” patients from their own health information was against the law and could result in fines for hospitals and doctors.

Its intention was to bring health care into the modern era. And the provision has successfully given patients easy access to their medical records, empowering them to play a more active role in their care by eliminating the doctor as gatekeeper.

But it has also led to experiences like mine, in which patients are confronted with material they never wanted to see. Some have learned about life-altering diagnoses and developments — from cancer to chronic illness to miscarriage — through emails and online portals, left to process the information alone.

Most doctors support the Cures Act as a whole. “We’re big supporters of the move in this direction” in general, said Dr. Jack Resneck, president of the American Medical Association and a dermatologist in San Francisco. But this provision, he said, is leading to “emotional and mental harm.”

Nicki Swann, 38, a professor in Eugene, Ore., was shocked and confused when she learned through an app that she had colon cancer after having polyps removed. She was home alone — her husband had taken their infant daughter on a walk — when she received an email letting her know that results were ready. “I couldn’t imagine that anything but good news would be shared in that way,” she said.

She immediately called her doctor’s office. But it was a Friday afternoon, and the physician was unavailable. They didn’t speak until the following week. “Any cancer diagnosis is going to cause trauma,” she said. “But I think it was much worse to receive it in that way.”

“When information is just given in black-and-white type on MyChart, that’s not the full expression of compassionate care,” said Dr. Elizabeth Comen, an oncologist at Memorial Sloan Kettering Cancer Center in New York City. “Yes, it is immediate care, but it’s care out of context.”

How did we get here?

Before the Cures Act provision, doctors had different approaches to giving patients their test results. Some offices would contact patients within hours or days; others sent paper results via mail. Some would take a “no news is good news” approach, sharing results only if they revealed something worrisome; others waited to share results in person.

Lawmakers hoped to standardize the way we get results and increase transparency, said Micky Tripathi, the national coordinator for health information technology at the U.S. Department of Health and Human Services. With the Cures Act’s provision on releasing medical records, there was to be no more wondering, waiting or spending time trying to track down answers.

“We should be adopting modern internet conventions,” Dr. Tripathi said, which includes making information accessible to consumers as soon as it is available.“I think that is the normal internet expectation all of us have.”

Genevieve Morris, a senior director at the health technology company Change Healthcare who, in a previous role, helped draft the Cures Act, said she thought patients had become used to not having access to personal data. “We now have to adjust to a world where we are going to have all of our data at our fingertips,” she said.

Many patients I spoke with appreciated having direct access to their health information. “I feel more in control,” said Yasi Noori-Bushehri, 32, an engineer in San Diego who has Graves’ disease, an autoimmune disorder that requires her to closely monitor her thyroid hormone levels. Having access to her medical information has given Ms. Noori-Bushehri confidence to ask for changes in her treatment plan: When her doctor suggested tweaking her thyroid medication, she pointed to previous lab reports suggesting that the change might throw her hormones out of whack. After talking it through, the doctor agreed.

Some patients said receiving test results — even difficult ones — before speaking with their doctor had allowed them to feel more prepared when they did connect. “You can go into the next appointment having done your homework,” said Teresa Christopherson, 59, who regularly gets updates on the status of her breast cancer via an online portal. She said that gave her the opportunity to “ask the right questions” about next steps. “Everyone has the right to their own medical information in real time, not on the doctor’s time,” she said.

Many doctors said they supported instant access, too, in most cases. “If your cholesterol has gone up, that might not be good news, but it’s not the same as finding out that you have a lung nodule in a chest X-ray,” Dr. Resneck said.

But when difficult, life-changing information is delivered in this way, “it cuts off any opportunity for doctors to get ahead of things,” said Dr. Emily Porter, an emergency room and sexual health physician in Austin, Texas, who has criticized the policy on social media.

The Cures Act does offer a “preventing harm exception” to its provision requiring the swift release of test results. But the bar for what counts as harm is high: The provider must be able to anticipate that the test results could lead a patient to harm himself or herself.

This exception also doesn’t account for cases in which a routine test reveals an unexpected finding. A weekend spent searching online for medical information with knots in your stomach — or, in my case, seeing an upsetting report — does not qualify as harm.

Last month, the A.M.A. released the results of a survey of 1,000 people about the Cures Act’s provision on test results. Roughly 42 percent of the patients surveyed wanted test results as soon as they were available, while about 43 percent preferred to hear from their doctors first. But among those who wanted instant access, more than half said that, in the case of a “debilitating, life-limiting or terminal illness,” they would like to speak with a doctor first.

Since the provision took effect, Dr. David Gerber, a lung cancer specialist at the University of Texas Southwestern Medical Center in Dallas, has met with many patients and caregivers who have shared their emotional distress over receiving results without context. In an editorial he wrote for an oncology medical journal last year, he described the experience of trying to get to a patient before the patient could receive results through an app as if it were a race. “I still remember the first time we lost,” he wrote, referring to a time when a patient’s wife was convinced that her husband’s cancer had returned after she misinterpreted a technical report delivered via email.

In an interview, Dr. Gerber said that he had previously provided results to patients within 72 hours — that was enough time to review them, confer with other physicians and come up with a treatment plan. “Things seemed a little bit smoother and less turbulent,” he said, “but not necessarily slower in a way that was clinically meaningful.” He would also release full medical reports to patients, but only after discussing the results with them.

Dr. Comen also acknowledged that previous systems had been imperfect. “We have to honor the reality that waiting can feel impossibly hard,” she said. “But I don’t think anything replaces a doctor holding your hand and looking you in the eye and saying: ‘I’m going to go through every aspect of this with you in real time. You can ask me your questions. I will read your body language. I will give you tissues. I will be there with you.’”

What’s next for patient care?

For the past several months, the A.M.A. has been urging the Department of Health and Human Services to make what Dr. Resneck calls “common sense” exceptions to the current rule. Last month, the group published a statement laying out its concerns and requesting language to “explicitly allow physicians, using their professional judgment, to withhold some information if immediate or proactive release could cause a patient mental or emotional harm.”

While such exceptions are allowed currently, they must be requested beforehand by a patient or caregiver. And with the existing technology, few providers have the practical ability to prevent a patient’s results from being automatically released electronically

Dr. Tripathi of Health and Human Services said, “We recognize this is a really big transition for all of us.” But he added that department officials hoped the Cures Act would encourage patients to become more engaged with their own care and talk with their doctors about how they want to receive information.

They would also like to see health care apps introduce more flexibility — including options for physicians to indicate a patient’s preferences on a case-by-case basis and ways for patients to opt out of receiving certain results in real time.

So what can patients do right now?

If you are undergoing a medical test, ask your doctor for expectations around timing, doctors said — both in terms of when results might be released electronically and when you can expect to hear from the doctor’s office, so you can prepare mentally and emotionally.

For Ashley Collins, 39, a breast cancer survivor in Durham, N.C., this kind of conversation was crucial to easing her emotional distress after a mastectomy.

After the surgery, Ms. Collins was eager to learn the results of biopsies that would reveal whether chemotherapy had eliminated her breast cancer. But before leaving the hospital, she spoke with her surgeon about timing, and her doctor told her that she would call her as soon as possible after the results were posted online. Knowing that she would be hearing from her doctor within a certain time frame, Ms. Collins opted not even to look at the MyChart report and waited for her call.

“From the time that you get the ding on your Apple Watch that says, ‘New results are in your chart,’ it’s a sort of Pavlovian response of anxiety that kicks in,” Ms. Collins said. “Mercifully, my surgeon called me very soon after the result was posted.”

How the Government Is Failing Americans Uprooted by Natural Disaster