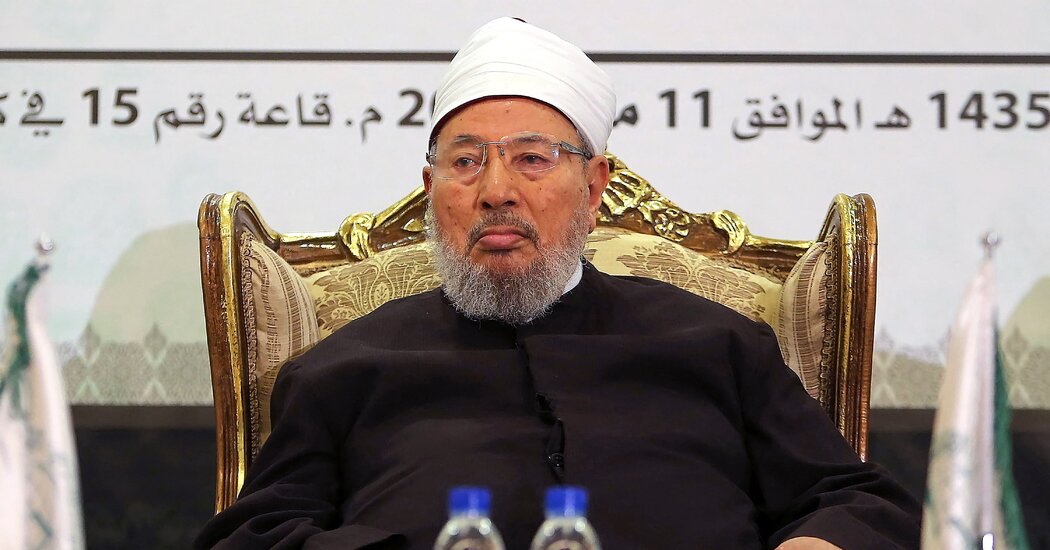 Considered a moderate by some and an extremist by others, he backed political Islam, attacked Al Qaeda and dispensed advice in a TV show viewed by millions.

Yusuf al-Qaradawi, the influential scholar, cleric and longtime advocate for political Islam who saw his life’s ambition nearly realized in the 2011 uprisings against Arab dictators across the Middle East, only to see them later fall apart, died on Monday in Doha, Qatar, where he had been living in exile. He was 96.

His health had deteriorated since he contracted Covid-19 two years ago, and he died at a hospital in his adopted country, his son Abdel-Rahman al-Qaradawi said.

Born in Egypt, where his active role in the Muslim Brotherhood, an organization viewed as a threat by Egyptian rulers, repeatedly landed him in jail, he fled to Qatar. Years later, his sermons on Qatar’s Al Jazeera network were seen by tens of millions across the Arab world and made him one of the most influential Islamic voices of the 20th century.

Thousands of people attended his funeral in Doha on Tuesday, including the deputy emir of Qatar and other Qatari and foreign officials.

But his views were not easily categorized. He was seen as a moderate by those who cited his denunciation of terrorist groups like Al Qaeda and the Islamic State and his edicts supporting women’s rights. He was seen as an extremist by others for sanctioning violence against U.S. troops in Iraq and backing Palestinian suicide bombings against Israelis.

And his support of democratic Islamic rule in the Middle East made him an enemy of Arab strongmen; Saudi Arabia, the United Arab Emirates, Bahrain and Egypt all declared him a terrorist, and Egypt sentenced him to death in absentia.

“He was hard to pin down,” Shadi Hamid, a professor of Islamic studies and senior fellow at the Brookings Institution in Washington, said in a phone interview. “On some issues he was moderate, and on others he seemed extremely intense, but he didn’t pretend to be anything he wasn’t.”

Yusuf al-Qaradawi was born in the village of Suft-el-Turab in the Nile Delta on Sept. 9, 1926, the only child of Abdullah al-Qaradawi, a farmer, and his wife. (His family did not provide further information about his parents.)

His father died when he was 2, and Yusuf was taken in by his uncle Ahmed al-Qaradawi. The uncle soon realized that his nephew was no ordinary child; he had memorized the entire Quran by the time he was 9. Urged by a sheikh from a nearby village to give the boy an Islamic education, the uncle sent him to a religious school in the city of Tanta to prepare him for the prestigious Al Azhar University in Cairo.

As a teenager in Tanta he attended a lecture by Sheikh Hassan al-Banna, the founder of the Muslim Brotherhood, and was electrified.

“He was a man like no other,” Mr. al-Qaradawi recalled in a 2017 interview with Al Jazeera. “He took upon himself the mission of preparing a hollowed-out nation to carry out the great mission of revival, renewal.”

Yusuf joined the Muslim Brotherhood, which held that Islamic law should be the basis of educational, social and political reform, a position that put it in opposition to the British, who then ruled Egypt, and later to Egypt’s military-backed rulers, who banned the organization.

His activism with the Brotherhood four times led to prison, where he was tortured. The constant threat of prosecution prompted him to flee to Qatar in 1960.

His work gained prominence when he challenged the teachings of the famous Brotherhood ideologue Sayid Qutb, whose advocacy of armed jihad was formative in the rise of groups like Al Qaeda and Islamic Jihad in Egypt.

“His invalidation of Qutb’s thought on jihad, in making the distinction that individual terrorist attacks are not jihad and that jihad is governed by specific rules, is his greatest legacy,” the veteran Egyptian journalist Abdel Azim Hammad said in an interview.

Mr. al-Qaradawi became known as a leading voice of a moderate school of Islamism, and was one of the first prominent Muslim scholars to condemn the 9/11 attacks on the United States, as well as Al Qaeda and the Islamic State.

But the development that launched him on the path to international celebrity was the founding of the Qatari satellite news channel Al Jazeera in 1996. Mr. al-Qaradawi hosted a call-in show called “Shariah and Life,” where he answered viewers’ questions about religious law in daily life and issued religious edicts, or fatwas.

He dispensed guidance on a wide range of subjects: Islam’s stance on evolution, whether it is permissible to eat foods cooked with alcohol, the morality of lottery cards, even when it is acceptable to own a dog.

His views were generally conservative, and secular Arabs bitterly opposed his views on Islamic rule as just another form of authoritarianism. But some of his fatwas on women’s rights — in one he held that women are permitted to hold top government positions — were considered progressive enough to offend hard-liners.

His denunciation of jihadist groups did not mean that Mr. al-Qaradawi was a pacifist.

During the second Palestinian intifada, or uprising, in 2001, he declared that suicide bombings by Palestinians against Israelis were permissible. And when the United States invaded Iraq in 2003, he sanctioned violent resistance against U.S. soldiers there.

Those fatwas led to his being banned from entering the United States and Britain.

In his 80s, he backed the Arab Spring uprisings of 2011, which in many ways seemed like the culmination of his life’s work, a dream come true. He called for the death of the Libyan dictator Col. Muammar el-Qaddafi, who was overthrown and killed later that year, and turned against Iran for its support of President Bashar al-Assad in the Syrian war.

Days after the Egyptian autocrat Hosni Mubarak was ousted by popular protests, Mr. al-Qaradawi returned to Egypt, leading Friday Prayer for hundreds of thousands of people in Cairo’s Tahrir Square.

“Don’t let anyone steal this revolution from you,” he warned in an impassioned sermon.

In its most democratic election ever, Egypt elected a Muslim Brotherhood leader, Mohamed Morsi, as president in 2012.

But the dream was short-lived. Mr. Morsi was ousted by the military a year later. The uprising was defeated in Syria; Yemen and Libya were left in chaos; and Tunisia’s democratic gains are at risk.

Mr. al-Qaradawi’s support for the uprisings and his vocal criticism of Egypt’s military-led government angered Egypt and its allies.

Egypt’s government designated Mr. al-Qaradawi and his seven children terrorists, and an Egyptian court sentenced him to death in absentia in 2015. In 2017, Egypt, the U.A.E. and Saudi Arabia launched a blockade of Qatar, citing its giving a platform to Islamists like Mr. al-Qaradawi as one of the reasons.

The Egyptian authorities arrested his daughter Ola al-Qaradawi along with her husband at their family’s Mediterranean villa. She was held without charge in abysmal conditions and locked in solitary confinement for months at a time.

By then Mr. al-Qaradawi had largely retreated from public life. His television show ended in 2013, and he devoted himself to his project of combining his more than 100 books into a single multivolume encyclopedia.

“He could no longer keep up enough with politics to engage or comment,” his son Abdel-Rahman said.

In his last days, Mr. al-Qaradawi spent time with his daughter Ola, who was released from prison in Egypt in late 2021. Her husband remains behind bars.

In addition to Ola and Abdel-Rahman, Mr. al-Qaradawi is survived by his third wife, Aicha; three other daughters, Siham, Ilham and Asmaa; two other sons, Mohamed and Osama; and 12 grandchildren. The entire family lives in exile.

Having lived for nearly a century, Mr. al-Qaradawi was part of the Islamist project nearly from its birth and toward the end of his life witnessed its ebb, with the Muslim Brotherhood in disarray and the failure of most of the Arab Spring revolutions.

“He was there from the very beginning, he was from the generation that saw Hassan al-Banna speak,” Mr. Hamid, the Brookings fellow, said. “His passing captures the passing of an era, and also, the hopes of an era.”

Where the Midterms Could Affect Abortion Most